Elm trees have not had a good century. Dutch Elm Disease, caused by fungus and spread by a beetle was introduced into the United States from Europe in the 1920’s. Since then we have created fungicide sprays and cultivates of Elm trees that are resistant to Dutch Elm Disease. Just when we thought it was all good. Elm Phloem Necrosis has spread and developed as a new threat. This disease will wipe out the remaining adult Elm trees in North America. What is Elm Phloem Necrosis?

An elm tree disease caused by phytoplasmas bacteria, which are parasitic bacteria that do not have a cell wall. It is spread by Leafhoppers.

The bacteria is so specialized at being a parasite that it can not survive on its own. The bacteria must live inside a plant host. This makes them very difficult to culture and study. Leafhoppers spread the disease when they feed on an infected plant and then feed on an uninfected plant.

Now we know what the disease is what are some solutions to the problem?

When Dutch Elm Disease was discovered many of the Elm species were screened for resistance. None was found. Cultivars have been developed to be less susceptible to Dutch Elm Disease and Elm Phloem Necrosis. However, no known species of Elm is completely resistant to these two diseases. We can screen again. Many species and cultivars were not screened for resistance to Elm Phloem Necrosis. Since the time of the first screening, we now have better molecular biology techniques to screen for resistance. These techniques would make it cheaper and faster to find a cultivar with resistance.

The reason why hybrids are typically better than their parents is that of genetic diversity. Because we do not know of any cultivar with total resistances to elm phloem necrosis we can not use those genes. However, we could increase the genetic diversity of cultivars in North America. This can be done by looking to relatives of Elm trees native to North America and to relatives to the elm trees. Ulmaceae, the family that Elm trees belong to has other genera. Including Ampelocera from South America and Zelkova from Southern Europe and Asia. Two species might provide this diversity: Zelkova serrata from Southeast Asia and Ampelocera hottlei from Central Mexico. Zelkova serrata has shown to be highly resistant to Dutch Elm Disease but is still susceptible to Elm Phloem Necrosis (Missouri Botanical Garden).

How would we create a Hybrid between species from two different genera? That would be like making a hybrid with your cat and a lion. There are a few ways: fusing cells, inserting DNA, and making a fertile hybrid.

The second way to make an elm hybrid is DNA insertion. We do with transgenic crops. However current methods only insert one gene. When only one gene is inserted expression of the gene slowly goes down. Eventually, you get the same plant you started with. There are tricks to keep the gene expressing the trait such as inserting it with a promoter to keep it going. Since we are going after genetic diversity the more genes inserted the more diverse the genome would be. This means we should insert as many genes as possible, not just one. To do this we can conduct TransChromo DNA insertion.

When two species are close enough they can sometimes create an individual. One example is the mule when a donkey and a horse reproduce. The mule, however, is not fertile. Today we can do this and make the hybrid fertile. This is even easier in plants. To do this we combine the sperm of one species and the egg of another then double the number of chromosomes. Even if the hybrid created was completely resistant to diseases it would still take time for it to grow into an adult tree. What is a quicker solution to kill the bacteria that causes Elm Phloem Necrosis?

One of the quickest ways to kill bacteria was discovered over 100 years ago, electricity. When electricity was able to be produced regularly people started experimenting with it and one thing they tested was killing bacteria and microbes. You might be thinking right now of that fishing joke that the lazy fisherman throws a bug zapper into a river and all the fish die from electricity. Oh, well I’m thinking of that joke. In practice, it would be the same thing. However, the problem is that in the fish example that amount of electricity needed is a lot. It would be very impractical to fish this way. But if we focusing on something small with a smaller electrical field the amount of electricity would be a lot less and easy to do. You just have to focus on the right size.

So what about bacteria, they’re small right? We use electricity to punch holes in a bacterial membrane to put DNA inside the bacteria. Elm Phloem Necrosis would be a good disease to try this because this bacteria only has a membrane and not a cell wall, making more susceptible to this technique. How would we try this? The solution is to go to the nanoscale. The smaller you are working with the less electricity needed to kill the bacteria. If the electricity is applied directly to the bacteria then this method would be feasible. How could we do this? A membrane inserted into the tree that gives a shock to bacteria in the phloem. 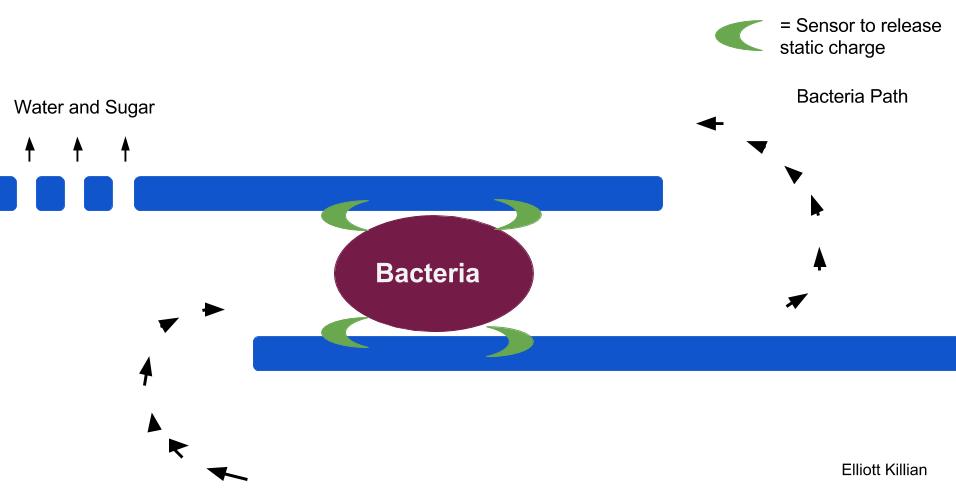 Bacteria would flow through the membrane. A sensor would detect the bacteria and release a shock. Water and sugar could move freely past the membrane. The problem with this solution is that the technology needs to make this membrane is only a prototype. A Stanford group (C. Liu, X. Xie, et al.) has created a device similar to this idea to be used to clean water. A device to kill bacteria in Elm trees could be developed in the future.

Some of the solutions above would take years to implement. What would be a way to kill the bacteria in the Elm trees that already exist? Antibiotics such as Tetracyclines have already shown to slow Elm Phloem Necrosis, however, they have not been shown to be a cure. How else do we kill bacteria?

We already kill bacteria in a different way to prevent our socks from getting smelly. Silver nanoparticles are used to kill odor causing bacteria. We could inject the tree with silver nanoparticles or put the particles into the soil where they would be absorbed by the roots. This could be a way to cure Elm Phloem Necrosis. There are a number of unknowns consequences with this approach. It would work in Elm trees since we do not eat Elm trees, however, what would happen if a pest like a leafhopper ingests some silver and it is transported to a crop that we do eat? What happens if we use the wood from the trees that have the nanoparticles in it? Or if the nanoparticles get into our water? What is the effect on the environment and human health?

Elm Phloem Necrosis could wipe out the remaining Elm trees in North America. It is caused by a phytoplasma, which is a primitive bacteria without a cell wall. One way the disease is spread is by leafhoppers. I proposed three possible solutions for Elm Phloem Necrosis: hybrids, electricity, and silver nanoparticles. Each has a strength and a setback. Let’s find a solution to this disease before Elm trees are gone.

Of these solutions creating a hybrid with molecular biology techniques is the best option. Elm trees are very susceptible to elm phloem necrosis and other diseases. Making the genome more resistant would help prevent these diseases.

IAA, a plant hormone has also been shown to help with phytoplasma pathogens in periwinkle. I propose this solution for Flavescence dorée, a grape disease caused by phytoplasma bacteria.