While I was in Dalat Vietnam, Randy (Business Partner) and I talked about going to China to talk to manufacturers in late April. We both already had visas to go to China. The manufacture of our Anura water meter products has a headquarters in Taiwan. So our plan became to go to Taiwan, then go to Hong Kong for a few days then go to China. Afterward, I would continue to stay in China for two weeks. I wanted to go to South China Agricultural University in Guangzhou, China. These plans change a bit.

On April 17th I flew to Taipei Taiwan and meet up with Randy. We checked out the Taipei 101 (Wikipedia). This building was once the tallest buildings in the world. 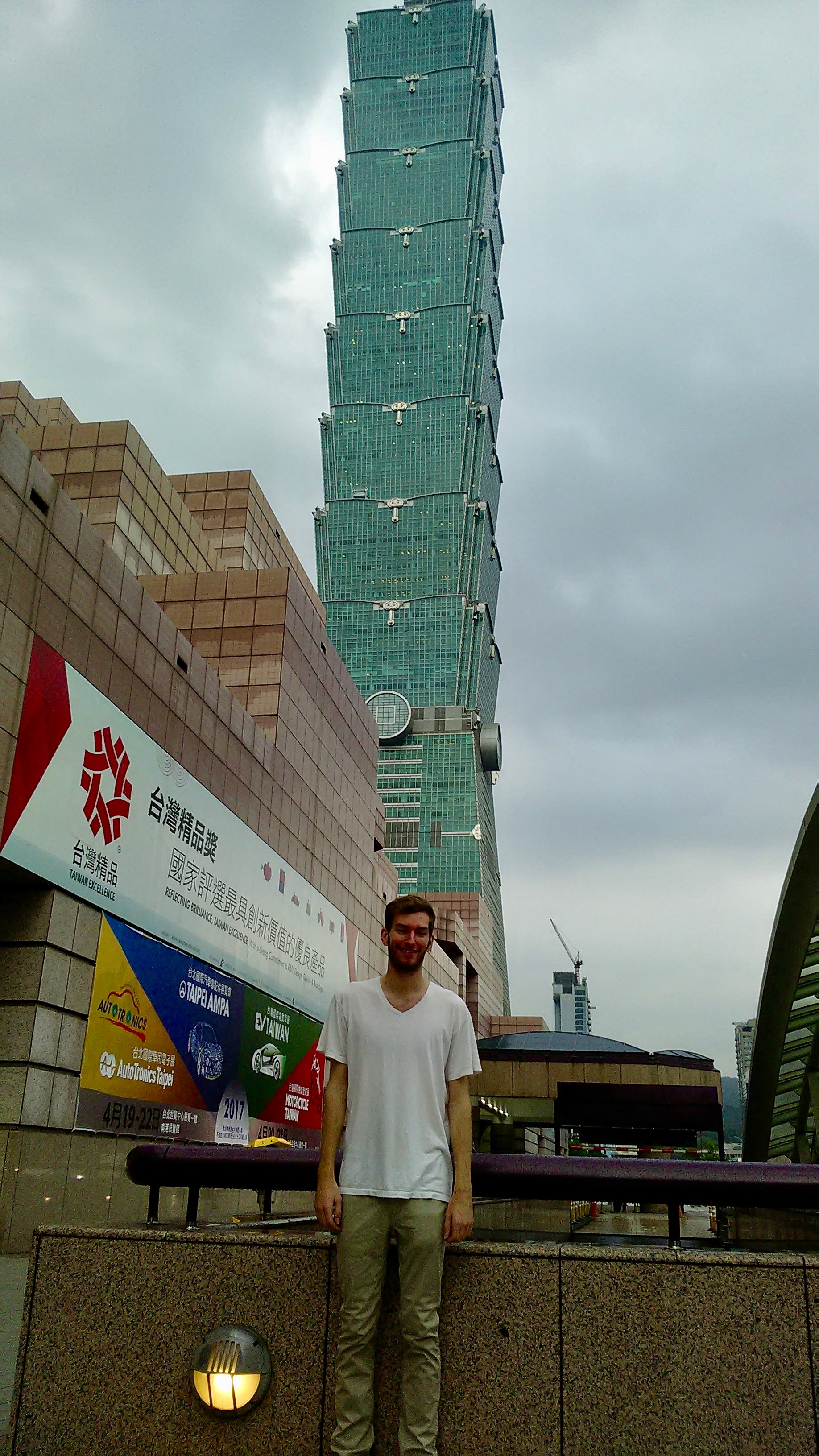 I really liked Taiwan. It very modern and easy to get around in the city. The other little things that made it great were: Fast internet, easy customs and immigration process, walkable, and easy to pay and get money.

While there we ate some delicious Chinese, Taiwanese, and Korean food. 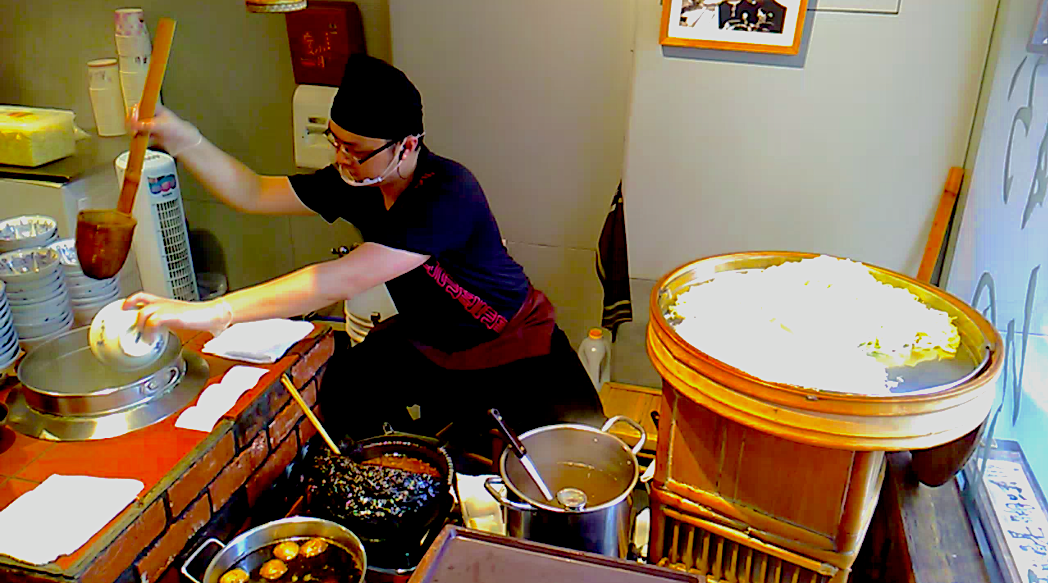 We met with the VP of the manufacture of the Anura products for lunch. It was great to talk to him in person. This helped us understand their process for getting our product produced.

We stayed in Taiwan for a few days then left for Hong Kong. Here is what Hong Kong looks like: 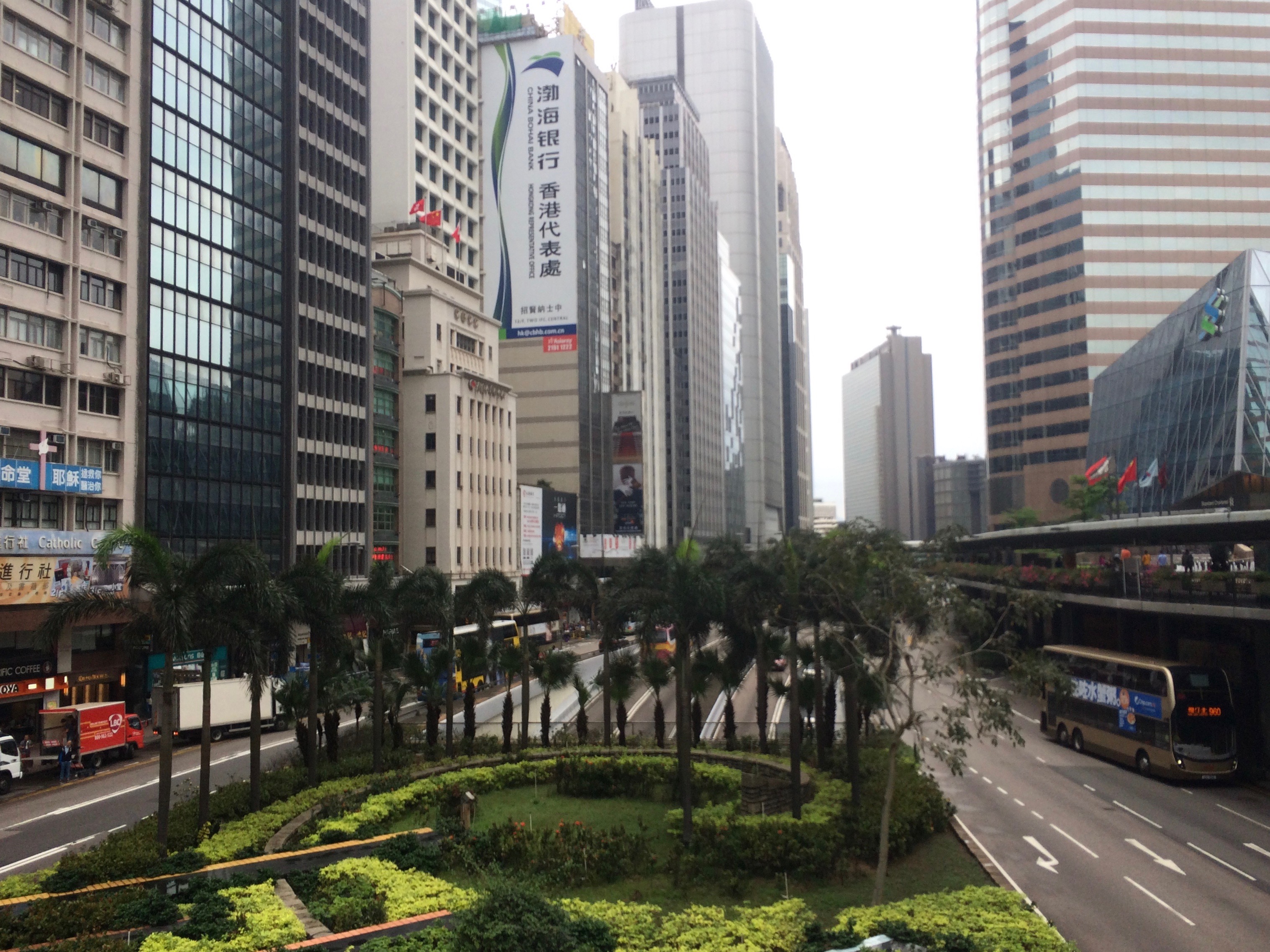 Hong Kong was amazing, however, it was the most expensive country I had been to. More expensive than the US. One example is I bought a burrito there for $15. A simpler burrito at Chipotle in the US would be $6-7. The restaurant also did not have to seats. This was common in Hong Kong, food and drinks were up to twice as expensive as my hometown.

In Hong Kong, we meet up with other friends there. There were also many foreigners living and working there. Many from the UK. It felt that Hong Kong was a very international city. Seeing people from all over Asia and Europe living and working in the city.

We spent two days sight seeing. Including going to Victoria Peak. A mountain that overlooks the entire city. 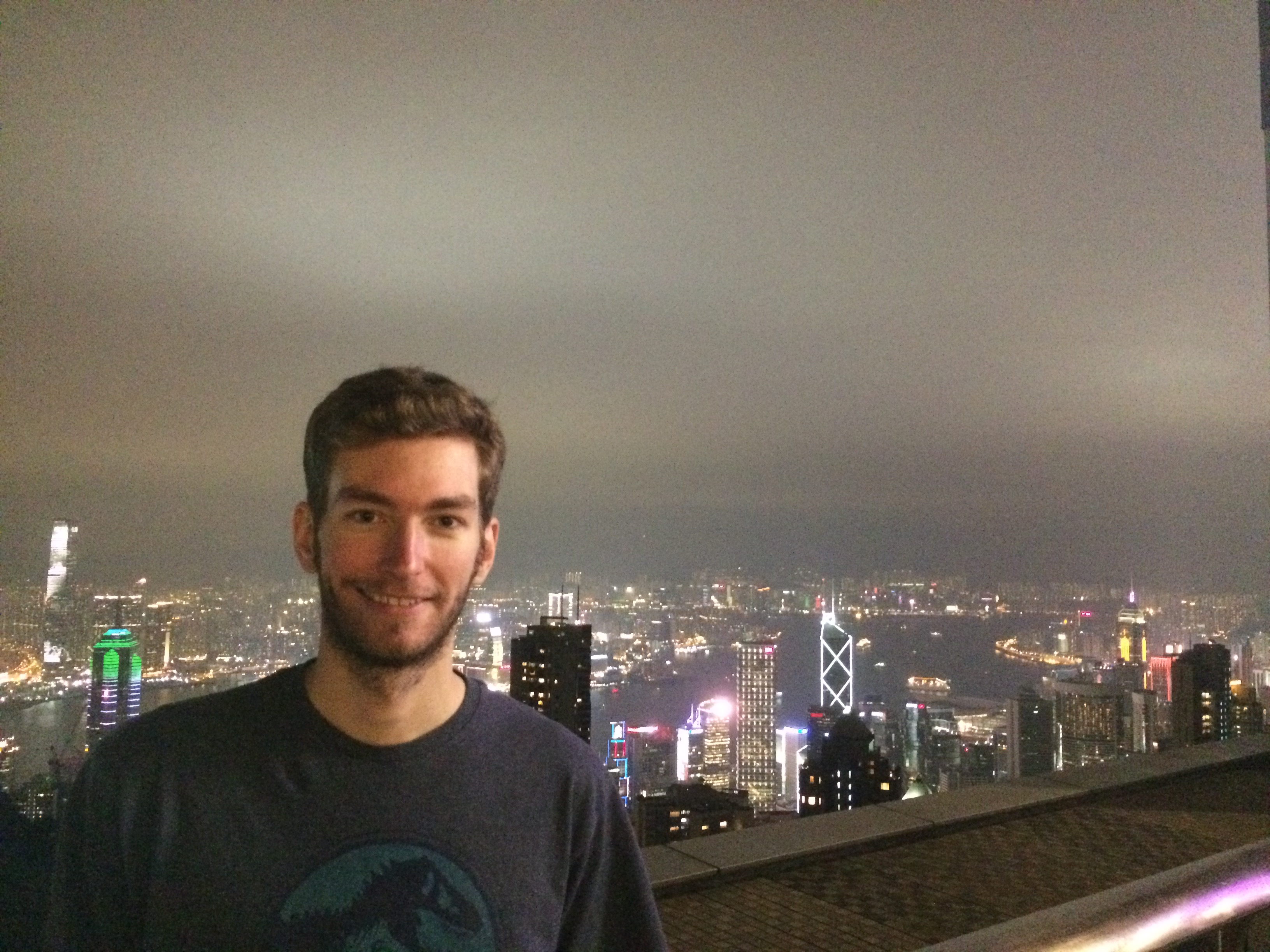 The time in Hong Kong was mostly fun while getting ready for our trip to Mainland China. We went to Shenzhen, a major manufacturing city in China with more than 10 million people. I had a SIM card from Hong Kong which I bought at a 7/11. I thought that it might work a mile or so into China because of the cell signal. As soon as we were half way across the bridge to China I lost all bars. The internet was gone in China. Crossing the border/checkpoint with the train getting there took us 3 hours. We were to spend 3 days in China. After the first day, Randy and I both were ready to leave. China made it very difficult to travel and stay there. What made it so hard?

Traveling in Asia you adapt to challenges. Directions are conquered with MapsMe, Google Maps, and Uber.  Adapt to a different, language with Google Translate and hand gestures. Using a different currency is easy with Credit Cards, and ATMs. China took away each of these ways to adapt.

In China, they do not have accessible internet. Sites like Google, Facebook, Youtube, and many News sites. I knew this before I went and thought for Google it only applied to search, but it applies to anything from a Google Server. This includes Gmail, Google Maps, Google Translate, Google Drive, and any website paying Google to use their server to host their website.

In Thailand, no one asked me if I spoke Thai. Most of the people I interacted with understood English if they didn’t speak it. Buying things there was very easy. A few times if I needed to communicate a complex idea to the front desk I would pull out my phone and use Google translate. If spoken language failed you can go far with hand gestures. Part of this is I believe that the Thai people want to help and interact with you. They want to do business with foreigners. In China, this is very different.

Google translate didn’t work. Before I left I downloaded Chinese onto my phone thinking I could use it if I didn’t have wifi, however it still needed the internet to translate. Ok, hand gestures. Randy needed over the counter medicine for his nose that was bothering him. He brought a used bottle of what he wanted and used hand gestures, but the person was unable to understand him. He walked around the shop until he found it. When in China and Hong Kong a few times I would be in a convenience store waiting for the casher. If I was too complex the casher would wave me away and take the next customer. They did not want to interact with us. In China, I was asked several times if I spoke Chinese and they were stunned that I didn’t.

In China currency is controlled by the government. In order to use a Credit Card, you must have a Chinese Credit Card. This means that you have to pay everything in cash. This was a challenge with checking into our hotel. Ok, so then we had to find an ATM. Well, because of the credit card issue, not all ATMs take foreign credit cards. ATMs from the Chinese state bank would work. It felt that we were constantly looking for an ATM that would take our cards.

Getting dinner in Shenzhen 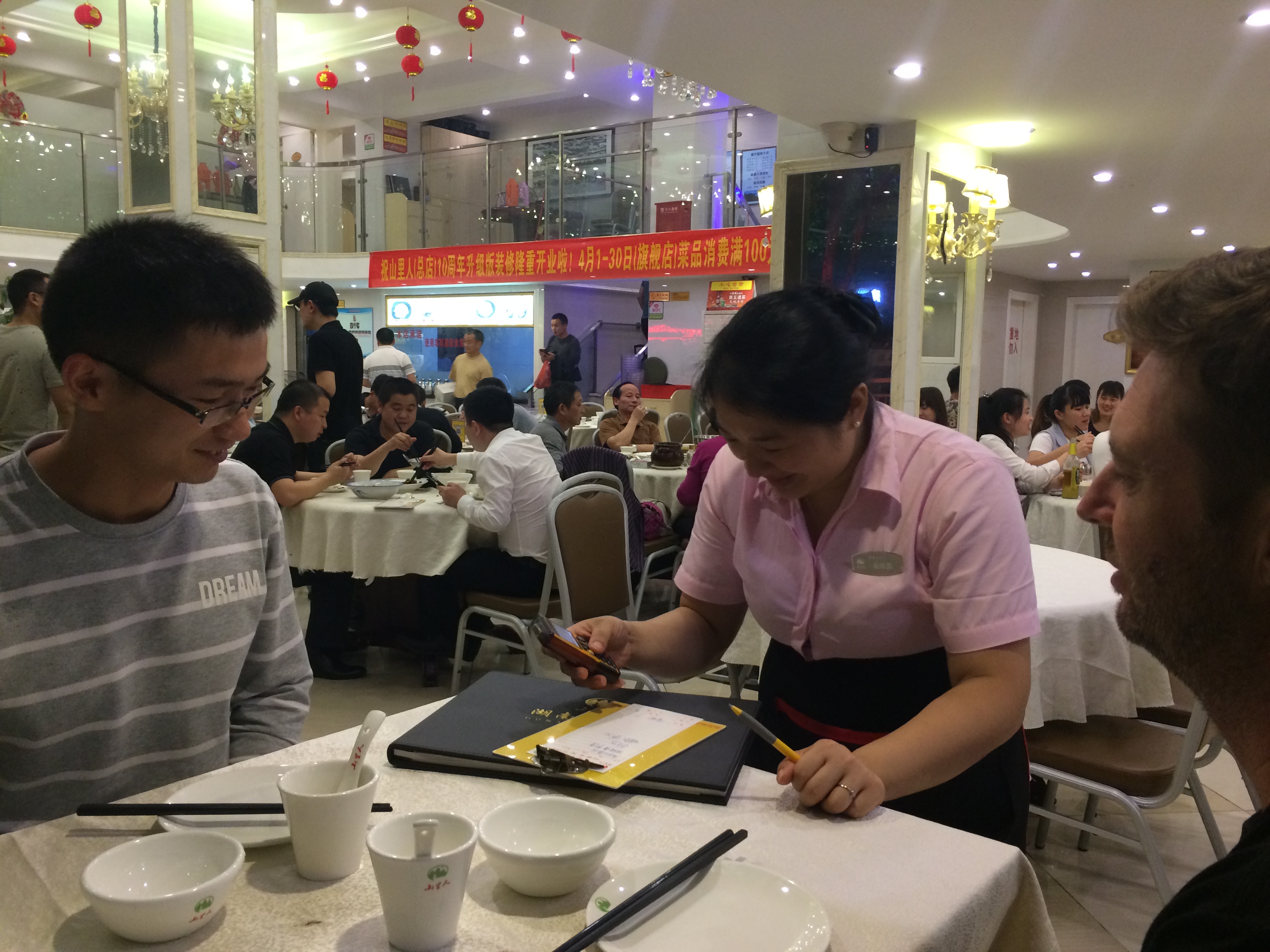 My plan of continuing in China for two more weeks seemed very difficult. My 3-month visa for Vietnam was still valid. Vietnam it was, I bought a Ticket to Hanoi. I couldn’t wait to get out of China. I headed back to Hong Kong to stay until my flight a few days later to Vietnam. Because my plan changed I didn’t have a place to stay my entire time.

It so happened that I arrived back in Hong Kong on a holiday weekend and almost all hotels were full. Airbnb had a few places in Hong Kong left and I booked one. I tried to communicate to the host several times with no response, so, I decided to go to the place. The metro took an hour to get to the apartment complex. I arrived when I was supposed to check in. The security guard asked where I was going. I showed her the apartment number. She then told me that I was at the correct building, however, the apartment did not exist.

I didn’t know what to do and was exhausted after pulling my 20 kg bag around Hong Kong. My plan was to find a place with wifi and book a hotel for the night. I ate at a pizza restaurant and was lucky that I could find a place. At the hotel, I called Airbnb customer support. They found me a place to stay in China, not understanding that I would have to cross a border. I was going back to China. I stayed in China for another two days before my flight to Vietnam. When I landed in Vietnam (#5 Hanoi Vietnam) I was so happy to be back. I walked down the street with a huge smile on my face and enjoyed some delicious Pho.

What would I change?

My first reaction after China was I told myself that I would not go back to China. I then realized that this would be impractical. I would cut off all future opportunities in China, plus I have a 10-year visa and would likely go back. Instead, I asked myself if I went back would I need. I would need a translator. A translator would have made everything easier and remove the challenge of language. Second would be a driver. With a driver, you don’t need Google maps as they are taking you where you need to go. My next trip to China should only focus on Business meetings.

This trip we tried to do research on products and continue to respond to emails. If we had someone else responding to emails and the focus was on meetings it would remove the pressure of using the internet and then being disappointed that it didn’t work. Lastly, I would make sure I have plenty of Podcasts downloaded for my free time.