To prevent an epidemic or disease one of three things has to be removed: Agent, Environment, Host (Read More: About the Disease Triangle). Let’s look at Butternut Canker Disease and find a solution for it by focusing on the Agent, Environment, or Host.

This disease was first discovered in 1967 and was found to cause multiple cankers or dead areas on the branches and tree. By the mid-1990’s, (in 30 years) the US forest service estimated that 80% of butternut trees had been killed by the disease (Agrios. Plant Pathology). What are the agent, environment, and host for this disease?

The host is Juglans cinerea or butternut trees. The fungus has also been seen to infect other members of the Juglans genus. Butternut trees are often used to make furniture and dyes. Compounds in the bark may have medical applications.

The trees are grown in eastern North America. When the bark is wounded spores from the fungus can enter and infect the tree. The main reason I am interested in this disease is that this disease could cause butternut trees to become extinct.

Now that we know about the agent, environment, and host; how can we change one of these elements to stop a disease? 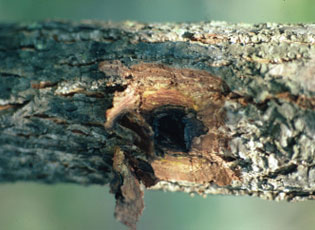 Because Sirococcus clavigignenti-juglandacearum reproduces is asexually is would not have a large degree of variance in its DNA. Having more variance or more genes in the gene pool allows for a species to adapt to a disease or change in environment. Asexual species don’t exchange genetic information through genetic crossing over or genetic shuffling that happens with sex. They are stuck with their same genes. When pathogens are introduced to species with low variance in their genes they can cause large outbreaks and could wipe out the species. This means that the pathogenic agent of butternut canker would make a great target for another pathogen.

What would be a good pathogen? A good pathogen would be one that is able to spread from tree to tree and infect the pathogen. A bacteria, virus, or fungi could do this. And it is very likely that Sirococcus clavigignenti-juglandacearum already has agents that infect it. We just need to find them. Here are a few examples of mycoparasites which are funguses that infect other fungi.

The advantage of using a fungi as the beneficial agent is that it can use the same transmission methods as sirococcus clavigignenti-juglandacearum, following it from tree to tree. The second reason is that the mycoparasite could also be genetically engineered to horizontally introduce genes into sirococcus clavigignenti-juglandacearum. Genes that we should introduce would reduce the fitness of the pathogen. Once the genes are in the pathogenic agent they could not be removed with sexual reproduction.

The pathogenic agent requires two factors from the environment to multiply. The first is breaks in the bark to get into the tree and infect it. The second is periods of rain for the production and release of the fungal spores.

To save some individuals, trees can be planted in drier areas. These dry trees could be used as a genetic pool for future breeding or genetic engineering programs. Using drier areas to reduce fungal spores only works for future trees and to a limited extent.

The fungus gets into the tree from a wound. How do you reduce wounds? You cover them. Wounds and trees could be sprayed with plaster or paint to thicken bark and cover the wounds. This would prevent the fungi from getting into the tree or if the tree is already infected, prevent spores from getting out of the tree. Similar to planting trees in drier areas this is a small-scale solution. It would not save most of the trees in the forest without lots of painters. To save the trees in the forest right now large applications to the forest must be made.

Instead of an artificial compound like plaster or paint to cover the wounds, what if another organism covered the wounds for us? This organism would compete with the pathogenic agent over a resource, the damaged bark. We could then spray the organism with drones or helicopters onto the forest to prevent the disease. An organism that could do this would be lichen or another non-pathogenic fungus.

To change the butternut there are three methods that can be used; traditional breeding, single gene insertion, and chromosome insertion. Each method has advantages and drawbacks. 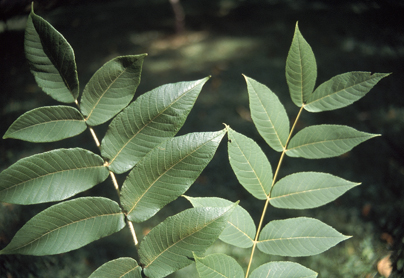 Producing a resistant butternut tree with genetic engineering tools can be done by inserting a single gene or a large piece of genetic information from another species. The best single gene to be inserted would be an R gene. R genes are plant’s resistant genes. One spinach R gene is being considered to be inserted into oranges to provide resistance to citrus greening disease (AgriLife Today). R genes inserted into butternut trees would be very quick and effective to provided resistance from butternut canker disease. R genes are great for a single or limited gene insertion, however large section of genes could make more sense to insert into butternut trees.

When a single gene is inserted it has a problem: long-term expression. Over time single gene insertions typically lose expression over time. When the gene is inserted with a gene gun or by the bacteria agrobacterium it is randomly inserted into the plant’s DNA. Because of this random insertion, the gene loses expression after a few generations. If an R gene was inserted with these techniques then only the first few generations would be resistant to the pathogen. If a larger piece of DNA was inserted then the gene of interest would also be inserted with its own regulation mechanism and won’t lose expression like the single gene insertion. A target R gene from a related plant such as walnut is identified. Then that chromosome is isolated, multiplied, and inserted into butternut tree’s genome. The target gene is more stable and will express for the long term, however, with this method many genes were also inserted and they may be unwanted. These other genes could change properties of the tree in unexpected ways.

Butternut Canker Disease caused by Sirococcus clavigignenti-juglandacearum has already infected over 90% of butternut trees. This disease is driving the tree to become extinct. To fight any disease one of three elements has to be changed; agent, environment, host. Solutions ranged from finding a parasite for the pathogenic agent, spraying lichen to cover wounds, and inserting whole chromosomes to give trees resistance. I hope one of these ideas is able to keep these trees around.