I previously wrote about how a disease outbreak is as good as the transmission or disease vector. A pathogen without transmission isn’t a disease.

The example I used was the black plague. That without fleas on rats, or without rats the disease would not have occurred. Taking away the method that the disease was transmitted, the vector would prevent the disease. This was my explanation for why we haven’t had another black plague outbreak.

In my Plant Pathology class, one idea we learned about was the disease triangle. Similar to the fire triangle of oxygen, fuel, and heat. The disease triangle is host, pathogen, environment. Just as a fire needs all three elements all three are needed for a disease to occur. If you can remove one then you can prevent a disease or a fire. Let’s look at an example. 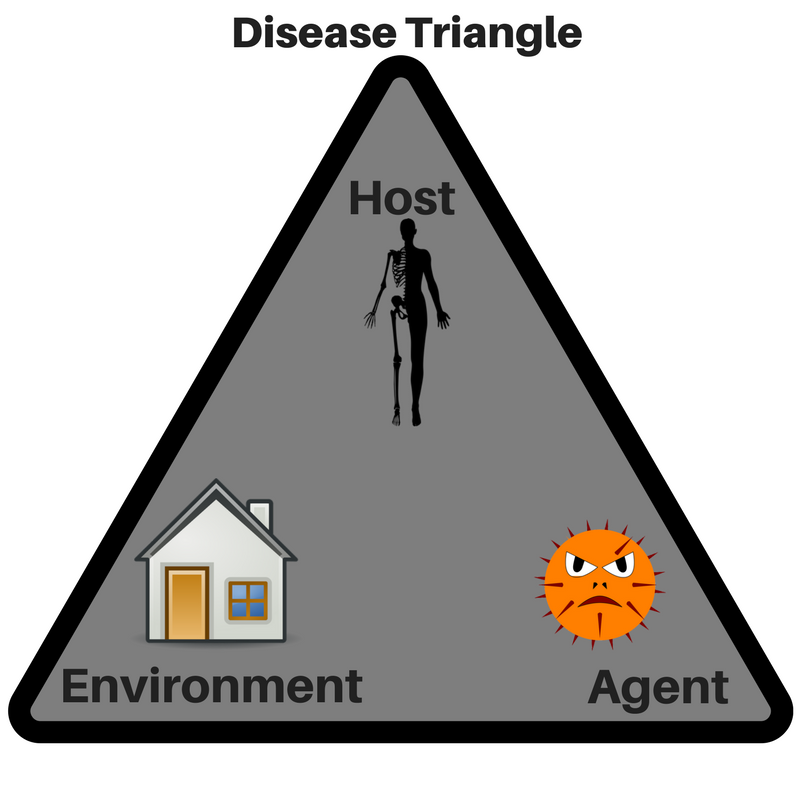 Malcolm Gladwell explores an epidemic in his book: Tipping Point. In the book, he shows some of the proposed causes of the syphilis epidemic in Baltimore in the mid- 90s. There were three explanations of the cause. One explanation is that increase in crack cocaine caused the epidemic. One study (Ellen JM, Langer LM, et al. 1996.) found that there was a connection between drug use and sexually transmitted diseases. One link was that people who were high before or after sex were more likely to be infected with a sexually transmitted disease. It is important to note that these are links and not causation. The second explanation was a decrease in a number of doctors. At that time Baltimore had the fewest number of doctors per capita. The last explanation was the change of city buildings. Housing projects in the city were destroyed at this time. It could be that some of the people living in those housing projects with syphilis were then spread all around the city.

For the syphilis epidemic what pushed it forward was not that the pathogen got stronger or that people’s immune system got weaker. It was the environment. Fewer doctors, increase in drug users who may not be concerned with safe sex, and changes to housing moving people to other parts of the city. These three factors all have to do with the environment.

When I learned about the disease triangle I had a question. Where do the vectors fit in? If the vectors, or how the disease is transmitted is the key to a disease as we saw with the black plague then why isn’t it in the triangle?

Let’s go back to the black plague. Are there rats in cities now? Yes. Why aren’t rats a problem spreading diseases today? Well according to historians cities back then had animal corpses laying in the street. On a plus side no street sweepers that required you to move your parked carriage. The low level of hygiene in this environment allowed the rats to live in great numbers. The rats then helped to transmit the disease. In other words, the environment increased the vector and then transmitted the disease. If we change the environment we prevent the vector and prevent the disease.

Centers for Disease Control and Prevention. Principles of Epidemiology. Updated May 18, 2012 https://www.cdc.gov/ophss/csels/dsepd/ss1978/lesson1/section8.html