Tobacco Mosaic Virus or TMV was the first virus discovered. In 1886 Adolf Mayer described the plant disease. Back then bacterias were the main culprit for diseases. Mayer noted the disease and everyone thought it was a bacteria. This changed in the 1930’s. It became obvious that TMV was not a bacteria. An agent (the virus) was shown to infect plants after being crystallized, something bacteria can not do. One lab used a filtration system to prevent bacteria from reaching the plants. In this lab TMV-infected plants. These experiments proved that TMV was not a bacteria. If not a bacteria what was it? Enter the electron microscope. Photos of TMV were taken with an electron microscope and viruses were discovered.

Positive-sense single-stranded RNA plant virus that infects many members of Solanaceae family. It can infect over 350 different species. The virus causes stunted growth and leaf discoloration.

TMV infects tobacco, many members of Solanaceae (nightshade family). This includes tomatoes, peppers, and potatoes. All economically important and tasty. According to Penn State Extension TMV can infect over 350 different species. It is difficult to measure the economic impact of Tobacco Mosaic Virus or any plant virus. A 2010 estimate of plant disease damage in George found that virus diseases cost $559,100 worth of damages to producers of Blackberry (Williams-Woodward, J. 2010.). For one crop in one state viruses cost half a million dollars. Imagine what the number would be for all crops in the world. Finding solutions for plant viruses would increase the amount of food we can produce. How does it spread?

Can Tobacco Mosaic Virus be spread from Cigarettes?

Yes. If infected tobacco leaves were used in the cigarettes then touching the cigarette can lead to spreading TMV.

That’s another reason not to smoke. How else does TMV spread? Tobacco Mosaic Virus spreads from contact. Humans are the primary vector, or way it spreads. We touch an infected plant or surface that has the virus and then touch a susceptible plant. The virus can stay viable for a long time which is how a cigarette can spread the disease. Other items such as tools, lab coats, clothing, or gloves can also spread TMV.

In integrated pest management, one of the first steps to take after you have identified a problem and decide to act is cultural practices. This includes hand washing practice, cleaning tools, and organizing your workspace. All of these sound simple but they can lead to a huge reduction in spending diseases. A team (Lewandowski, D. J., Hayes, A. J., and Adkins, S. 2010) looked at disinfectants for TMV and other viruses on petunias.

The team found that often petunia plants do not show symptoms of TMV even if they were infected. Clippers were shown to transfer the virus to up to 20 plants after being used on an infected plant. Plants not showing signs or symptoms and Clippers transferring the diseases to plants makes it clear for a need of disinfectant for tools. They tested many chemical disinfectants including milk. They found that Non-fat Dried Milk was easy to get, safe, and one of the best disinfectants they tested.

When scientist develops antibiotics they look for differences between humans and bacteria. These differences are called targets. The antibiotics focus on these targets. Here is an example of how targets work. Antibiotics block essential proteins in bacteria. Humans have different proteins so the antibiotics don’t affect us. What are the targets for TMV? The virus is made up of two components: genetic information and a protein coat. The protein coat for Tobacco Mosaic Virus is made from only one protein. This protein is only found in this virus, not found in plants or other organisms. The protein that makes up the coat would be an ideal target.

In ecology, if this was an invasive animal we would look to introduce a predator. The predator would then control the population. What is the predator of a virus? A virus is only genetic information and a protein coat. As shown the protein coat is a target and the weak point to attack. There is something that could attack a protein coat: a prion. Prions are deformed proteins that can cause other proteins to be deformed. If you think of the proteins that make up the coat as a resource. When a prion is introduced it would reduce that resource and reduce the ability of the virus to reproduce. What would a protein coat prion look like? What does the virus look like? Here is an illustration of the virus. 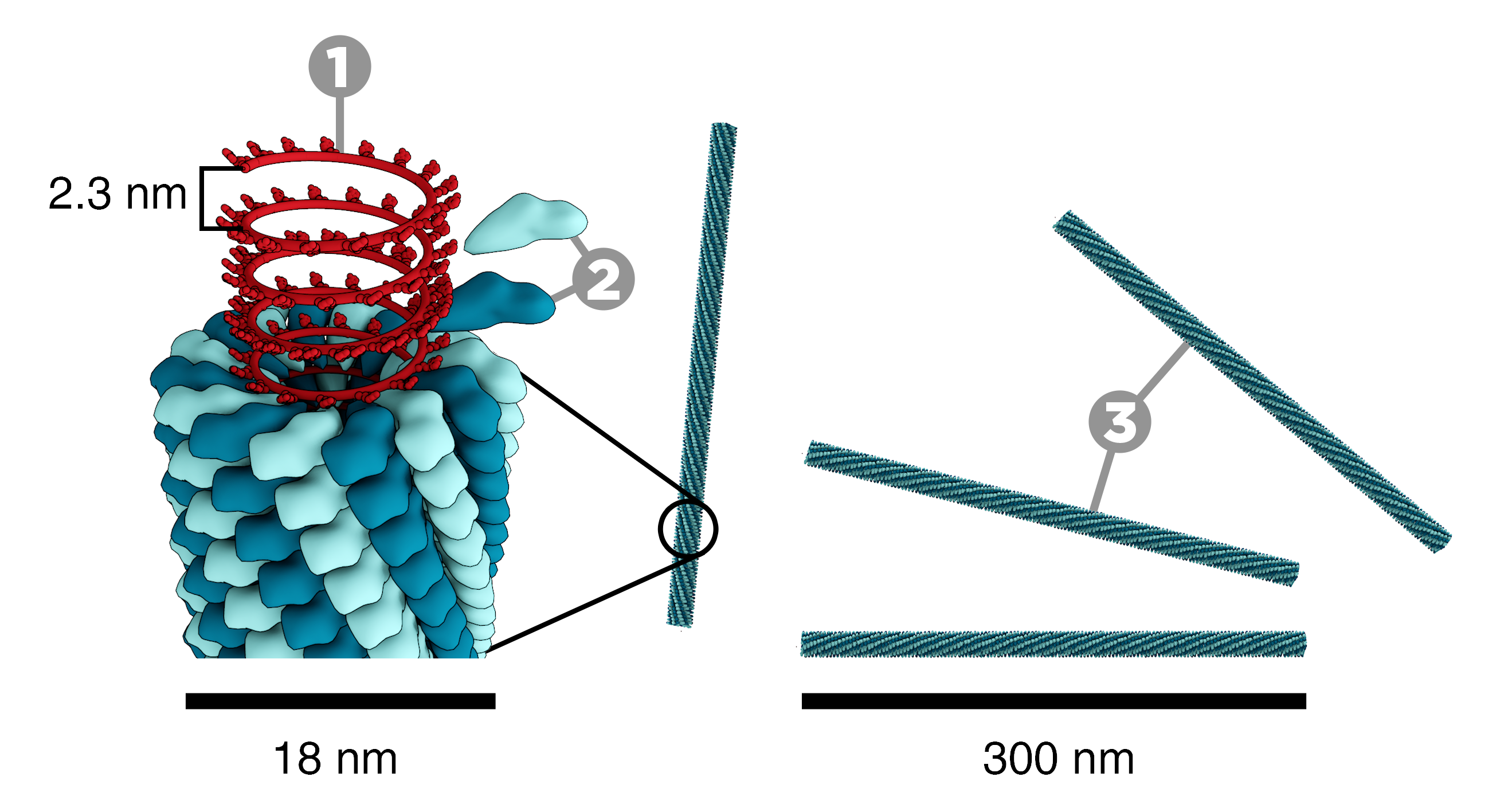 The proteins are stacked very closely together. They twist at an angle making a spiral. For a prion all that would be needed would be to make the proteins to twist at a different angle when assembling. This would cause them to assemble to another vessel that the genetic information can not use, preventing the virus from being made. The infected cell would then be killed and release non-viable protein coats. Engineering a system that does this will take time. What is another way to provide protection to the plant with tools we already have? Genetic engineering is one way.

Instead of the whole plant, only parts of the plant should be focused on defense. Tobacco Mosaic Virus spreads through contact and through the phloem. Companion cells in the plant could be designed to express digestive enzymes to target the protein coat of TMV. This would keep the phloem free from the virus and prevent the virus from spreading to other parts of the plant.

When suggesting ideas I like to suggest one idea that can be implemented right away, one idea that would be a long term solution. For Tobacco Mosaic Virus the idea that can be applied right now is using milk or Non-fat Dried Milk as a disinfectant. The long-term solutions are typically inspired by ecology. In this case, it is finding a predator for a virus which is a prion. Developing a prion for the protein coat of a virus is a challenge, however, if done would provide long-term passive control of the virus.

You can read more of what I wrote about plant science